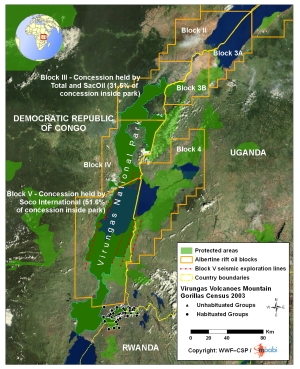 Plans to explore for oil in the UNESCO World Heritage Site, Virunga, Africa’s oldest National Park have caused considerable controversy. The WWF is presently undertaking a high profile campaign to defend the World Heritage Site from British based Soco International plans for oil exploration. While it is the Mountain Gorilla population that, perhaps unsurprisingly,  has received the most attention, it is the  possible risks operations pose to Lake Edward that are of most concern. Further oil concessions have also been  granted on Lakes Albert, Tanganyika and Malawi. These slow flushing fresh water ecosystems are the largest and most important on the continent, feeding the River Nile and River Congo on which millions of people depend.

For further information of oil and gas prospecting in Virunga:

Though less high profile, ere are numerous other protected areas currently at risk of mineral exploration within the DRC, please see Mining and Biodiversity Overlaps Report