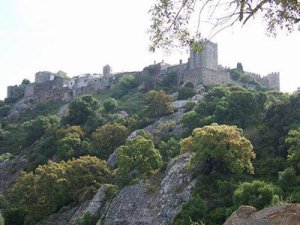 Not Included in the Sale- Castillo de Castellar, the Moorish Citadel

The  Almoriama Estate is proving to be the most controversial of  over 15,000  public properties Spain’s embattled PP party seek to  relinquish in the biggest sell off of national assets seen in Spain’s 36 year democracy . The €180M price tag and included planning approval for a tourism macro project aimed to attract foreign buyers are leading to local protests and the reopening of old political disputes.

Considered one of Spain’s finest national public properties, only a fraction of the Almoraima Estate 14,100 hectares is dedicated to conventional farming such as cattle ranching and cotton. Located in Spain’s south western province of Cadiz, the majority of the Estate  is Mediterranean forest, predominantly cork oak  – 90% of which is designated within the 167,767 hectare Alcornocales Natural Park – considered to be one of Europe’s most important forests. Proving that not all extractive industries harm the environment, cork production and hunting  have ensured the forests survival through a turbulent past.

However, protected area status does not legally prohibit the sale of this publicly owned estate. In contrast to national parks, natural parks or parques naturales are designated to protect landscapes molded through centuries of traditional land use – thus these land use practices and the  ownership ties on which they depend are maintained and encouraged. Large parts of of Spain’s Natural Parks network, although under the auspices of regional government or Juntas, continue  under private ownership.

Though an  inconvenience to the visitor and burgeoning rural tourism sector, these vast private estates have far more profoundly impacted Andalucian society, providing a significant historical source of civil unrest amongst a large poor and landless population and proving a major cause of the nation’s civil war.

Indeed the ownership  of the Almoraima Estate  provides a microcosm of Andalucian social history and belies a not so distant feudal past. Traceable  to the granting of land during the reconquest of Moorish Spain, the Spanish term for these large estates, latafundia, betrays an even older Roman past – of  lands won through conquest and serviced by the enslavement of the vanquished. While many of the old landed estates have been broken up,  La Amoraima is one of the few remaining latafundias to survive into the 21st century relatively intact – importantly it is also one of the few to have found its way into public hands.

A super exclusive mega resort was unlikely the vision of Felipe Gonzalez, whose PSOE government expropriated the estate from the corrupt business empire of businessman Ruiz Mateo in 1983 – the legal degree citing  grounds of public utility and social good. In the deal the Almoraima was brought  under  the auspices of central government and the cork and hunting businesses were re-privatized. Ironically, it was at this time that hunting fences were erected throughout the estate to increase game and profit, thus pushing the forest into further isolation from its neighboring communities – a lost kingdom to all except the wealthy hunter.

As in many other parts of the world hunting  has proved a controversial though singularly effective means of biodiversity conservation. For despite the undoubted popularity of hunting in Southern Spain –  Andalucia’s hunting association has over 100,000 members – photos of butchered deer from a large cull within the Estate and Natural Park caused public uproar when they made the Spanish national press in 2011.

Yet if hunting has proved a contentious means of conservation within this protected area,  cork production has proved far less so. The green credentials of the cork business are enough to make other extractive industries turn, well, green with envy.  The worlds managed cork forests are an important carbon sink, claimed by the industry  to sequester approximately 10 million tons of CO2 each year and although recent independent research suggests the cork industry’s carbon offsetting potential to be exaggerated, the biodiversity value of these forests remains undeniable. This iconic ‘dehesa’ landscape is considered one of the worlds biodiversity hotspots and home to species such as the  Iberian lynx, the worlds most endangered species of wild cat.

While its use in the wine industry is best known, cork’s unique qualities are unrivaled in a host of other niche applications from sporting products to sound proofing. No other material is known to have a better weight to thermal insulation ratio  and  amongst other things, cork has been a preferred component of heat shields for spacecraft. 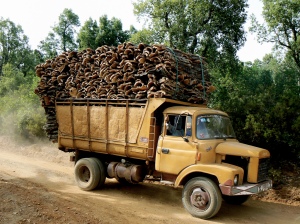 Despite the economic potential of cork, there is no secondary processing of the material on the Estate and  in recent years this related industry has disappeared entirely from the region. However, while  Government proposals for the Almoraima do include some secondary processing plans for local cork, they have primarily focused on developing the estates undoubted tourist potential.

The Alcornocales Natural Park, of which the Almoraima Estate makes up  some 7.6%, is sometimes  described by the Spanish as Europe’s last remaining jungle. Its hidden valleys or ‘canutos’ remain frost free and have sheltered relic species more normally associated with sub tropical regions,  providing habitat for their survival since the warmer climates previous to Europe’s last ice age. The park lies within the bird migratory bottle neck that is the Straits of Gibraltar and also contains archeological sites of global importance,  spanning thousands of years of human history. The  Almoraima itself contains sites of Neolithic, Roman, Visigothic and Moorish origin. 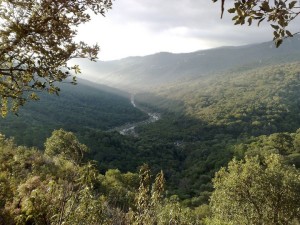 Despite the regions potential for rural, cultural and ecological tourism, Government  plans for the estate rest on finding a buyer interested in their exclusive luxury  tourism project – which include plans for a a 5 star hotel, two golf courses, an equestrian center, polo fields and private airport.  Assurances have been made that the project will be sustainable and planners behind the project stress that these developments will take place only within parts of the Estate that lie outside the Alcornocales Natural Park boundaries. Ironically however, it is these eastern parts of the  Estate, lying outside the natural park and separated by road and rail from the main forest mass, that are devoid of hunting fences and thus presently allow public amenity space for the nearby residents of  San Roque, Tesorillo and Castellar de la Frontera.

Castellar is without doubt the most effected by the planned sale and has been at the center of local opposition-  the Almoraima Estate takes up over 80% of the municipality’s total surface area. In fact the new town owes its very existence to the old latifundia, part of 700 hectares expropriated  by Franco in the late 60’s  to resettle inhabitants of its crumbling Citadel and  families displaced by the new Guadarranque Reservoir. The Citadel later becoming squatted by  a disparate community of travelers, foreigners and smugglers until it and a further 580 hectares  were again ceded by the estate to the Municipality  in 1981.

The Mayor of Castellar , Juan Cassanova – has led  the growing opposition to Madrid’s plans and  put forward an undoubtedly less grand though more sustainable alternative – focusing equally on cork, forestry and rural tourism,  the Mayors plans  include a bio generator project for waste products from Estate. The provincial and regional governments are also strongly opposed to the sale and, along with local community opposition,  present a significant obstacle to Madrid’s plans.

However, the proposed sale  of the Almoriama and included tourism project are not the only threats  facing the 167,000 Natural Park. Like its more famous neighbour, the Doñana National Park, the Alcornocales  is being eyed by the  petroleum industry.

Petroleum exploration licenses have been granted within the Natural Park close to the Almoraima Estates southern border. The license block is jointly owned by American  Shuepbach Energy and Australian based Petrel Energy Limited, both with backgrounds in hydraulic fracturing. Despite a regional  moratorium on fracking passed by Andalucia’s Junta in October 2013,  Petrel exercised their  option with Shuepbach last month to increase their stake in the Spanish license block to 43%. Additional seismic surveys are planned for second quarter of 2014 suggesting the industry remains confident in its hydrocarbon potential despite the regional fracking moratorium. But while plans to sell off  the Almoraima have received wide national media attention, petroleum interest has so far slipped largely  under the radar.

Together with the mega resort plans these developments pose a serious risk to the integrity of one of Europe’s most bio diverse forests and to some of the Spain’s most iconic cultural heritage. Opposition to planned developments is sure to be strong for  Los Alcornocales Natural Park and the Almoraima Estate that lies within   are of immense national pride. But don’t just take it from me: